An unusual little flower, nothing else looks quite like this.

The name Town Hall Clock is a reference to the way that the flowers are arranged. It has four flowers at right angles to each other, much like the clock faces on a Town Hall Clock and a fifth flower on top facing skyward, giving the appearance of a little cube of flowers atop a single stem. 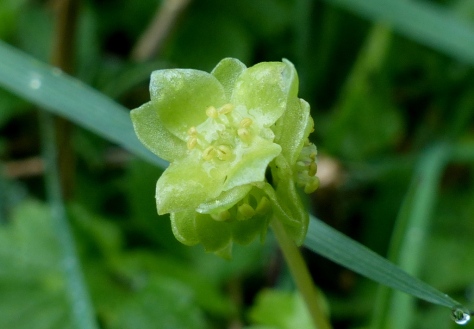 The four flowers that form the sides each have five petals and the flower on top has four. The styles and stamen of each flower match the petal count.

A side flower has five petals, five styles and five pairs of stamen (giving the appearance of ten stamens)

The flower on top has four petals, four styles and four pairs of stamens.

The leaves appear in opposite pairs. The leaf stalks flatten where they join the stem. Each leaf is split into three lobed leaflets and there is a fine point at the tip of each lobe.

Another common name for this flower is Moschatel and this is a reference to the flower’s musk like scent that is most noticeable in the evening.

This is quite a small flower and easily overlooked. The leaves appear in February and March and it flowers in early April. You will see it in woodland and along hedgerow tracks, it seems to tolerate shade well. It is especially common in ancient woodland.

Back to Green Wildflowers